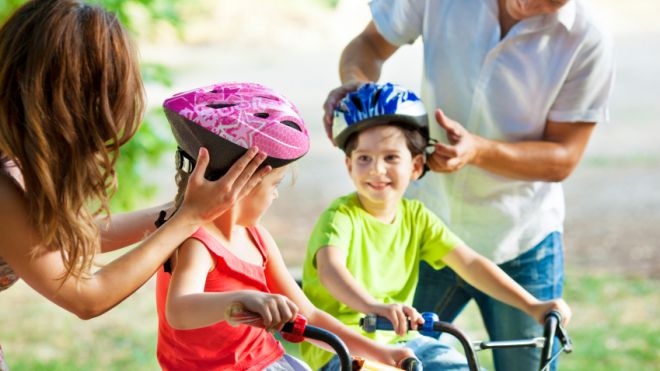 U.S. states that require children and teenagers to wear helmets report fewer deaths involving bicycles and cars, according to a new study.

Researchers analyzed the number of U.S. bicycle deaths between 1999 and 2010 and found that states with bicycle helmet laws reported about 20 percent fewer bike-related fatalities among people younger than 16 years old.

“The impetus is that when you make it a law, parents realize it's important and parents get their kids to do it,” said Dr. William Meehan, the study's lead author from Boston Children's Hospital.

About 900 people die as a result of bicycle crashes every year in the U.S. and about three quarters of those are from head injuries, according to Meehan and his colleagues.

Previous research has found that wearing a helmet may reduce a person's risk of a head or brain injury by up to 88 percent, but few studies have looked at the effect of helmet laws on national injury and fatality rates.

Using a national database that tracks the number of traffic-related deaths in the U.S., the researchers compared the number of children and teenagers killed while riding their bicycles in the 16 states that enacted helmet laws around the start of the study in 1999 to states without helmet laws.

In 1999, only 16 states had helmet laws and the overall rate of bicycle-related child deaths in the U.S. was 4 per million.

Between January 1999 and December 2010, there were 1,612 bicycle-related deaths among children younger than 16 years old, the researchers found.

After adjusting for other state characteristics known to be associated with traffic-related deaths - such as household income, and drunk or elderly driving laws - the states with helmet laws still had fewer reported deaths in that age group.

“We would recommend that any state that doesn't have a mandatory bicycle helmet law for children consider one or institute one,” Meehan said.

Dr. Frederick Rivara, a professor of pediatrics at the University of Washington and Seattle Children's Hospital, said it's nice that the new study shows states with helmet laws report fewer deaths, but he said it's important to remember that helmets can also prevent serious injuries.

“Bicycle fatalities represent only the very tip of the iceberg,” said Rivara, who has studied bicycle helmet safety but was not involved with the new research.

The American Academy of Pediatrics currently recommends that children wear a helmet approved by the Consumer Product Safety Commission every time they ride a bicycle.

“Helmets are very effective. They're cheap, they're light, they're comfortable and they work,” Rivara said.