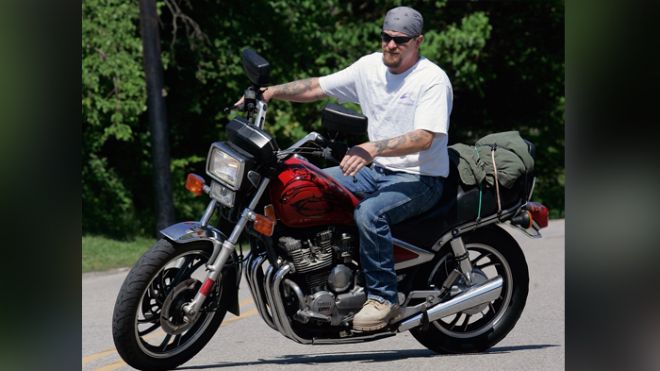 The average medical claim from a motorcycle crash rose by more than one-fifth last year in Michigan after the state stopped requiring all riders to wear helmets, according to an insurance industry study. Across the nation, motorcyclists opposed to mandatory helmet use have been chipping away at state helmet laws for years while crash deaths have been on the rise.

For more than 40 years, Michigan required all motorcycle riders to wear helmets. State legislators changed the law last year so that only riders younger than 21 must wear helmets. The average insurance payment on a motorcycle injury claim was &#36;5,410 in the two years before the law was changed, and &#36;7,257 after it was changed — an increase of 34 percent, the study by the Highway Loss Data Institute found.

After adjusting for the age and type of motorcycle, rider age, gender, marital status, weather and other factors, the actual increase was about 22 percent relative to a group of four comparative states, Illinois, Indiana, Ohio and Wisconsin, the study found.

“The cost per injury claim is significantly higher after the law changed than before, which is consistent with other research that shows riding without a helmet leads to more head injuries,” said David Zuby, chief research officer for the data institute and an affiliated organization, the Insurance Institute for Highway Safety. The data institute publishes insurance loss statistics on most car, SUV, pickup truck and motorcycle models on U.S. roads.

While other studies have shown an increase motorcycle deaths after states eliminate or weaken mandatory helmet requirements, the industry study is the first to look specifically at the effect of repealing helmet requirements on the severity of injuries as measured by medical insurance claims, Zuby said.

Some states have sought to mitigate the repeal or loosening of mandatory helmet laws by setting minimum medical insurance requirements, but “that doesn't even come close to covering the lifelong care of somebody who is severely brain-injured and who cannot work and who is going to be on Medicaid and a ward of the state,” said Jackie Gillan, president of Advocates for Highway and Auto Safety, which backs mandatory helmet requirements for all riders.

Jeff Hennie, vice president of the Motorcycle Riders Foundation, dismissed the study, saying the insurance industry views helmets as “the silver bullet that's going to change the landscape of motorcycle safety.” He said insurers are upset because “life has gotten more expensive for them and they have to pay out more.”

“The fact is our highways are bloody,” Hennie said. “This (the Michigan helmet law change) doesn't make helmets illegal. ... No one is forcing anyone to ride without a helmet.”

Vince Consiglio, president of American Bikers Aimed Toward Education of Michigan, blamed the increase in the severity of injuries on bikers who don't take safety courses required to obtain a special motorcycle license. He said bikers without motorcycle licenses have made up an increasingly larger share of fatalities and injuries in recent years.

But Gillan said the study “clearly shows there is no such thing as a free ride, and the public is paying the cost for this.”

Nationally, motorcycle deaths have risen in 14 of the past 15 years, and appear to have reached an all-time high of more than 5,000, according to an analysis by the Governors Highway Safety Association of preliminary 2012 data.

In 1967, to increase motorcycle helmet use, the federal government required that states enact helmet laws in order to qualify for certain federal safety programs and highway construction aid. The federal incentive worked. By the early 1970s, almost all states had motorcycle helmet laws that covered all riders. In 1976, Congress stopped the Transportation Department from assessing financial penalties on states without helmet laws, and state lawmakers began repealing the statutes.

In 1991, Congress created new incentives for states to enact helmet and seat belt laws, but reversed itself four years later.