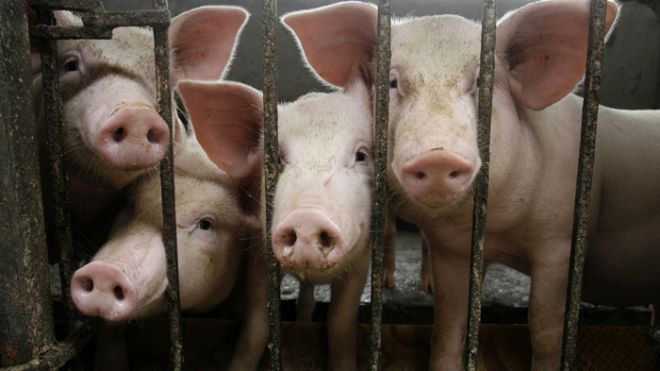 Pigs fed a diet of only genetically modified grain showed markedly higher stomach inflammation than pigs who dined on conventional feed, according to a new study by a team of Australian scientists and U.S. researchers.

The study adds to an intensifying public debate over the impact of genetically modified crops, which are widely used by U.S. and Latin American farmers and in many other countries around the world.

The study was published in the June issue of the peer-reviewed Journal of Organic Systems by researchers from Australia who worked with two veterinarians and a farmer in Iowa to study the U.S. pigs.

Lead researcher Judy Carman is an epidemiologist and biochemist and director of the Institute of Health and Environmental Research in Adelaide, Australia.

The study was conducted over 22.7 weeks using 168 newly weaned pigs in a commercial U.S. piggery.

One group of 84 ate a diet that incorporated genetically modified (GM) soy and corn, and the other group of 84 pigs ate an equivalent non-GM diet. The corn and soy feed was obtained from commercial suppliers, the study said, and the pigs were reared under identical housing and feeding conditions. The pigs were then slaughtered roughly five months later and autopsied by veterinarians who were not informed which pigs were fed on the GM diet and which were from the control group.

Researchers said there were no differences seen between pigs fed the GM and non-GM diets for feed intake, weight gain, mortality, and routine blood biochemistry measurements.

Biotech seeds are genetically altered to grow into plants that tolerate treatments of herbicide and resist pests, making producing crops easier for farmers. Some critics have argued for years that the DNA changes made to the transgenic plants engineer novel proteins that can be causing the digestive problems in animals and possibly in humans.

The companies that develop these transgenic crops, using DNA from other bacteria and other species, assert they are more than proven safe over their use since 1996.

CropLife International, a global federation representing the plant science industry, said more than 150 scientific studies have been done on animals fed biotech crops and to date, there is no scientific evidence of any detrimental impact.