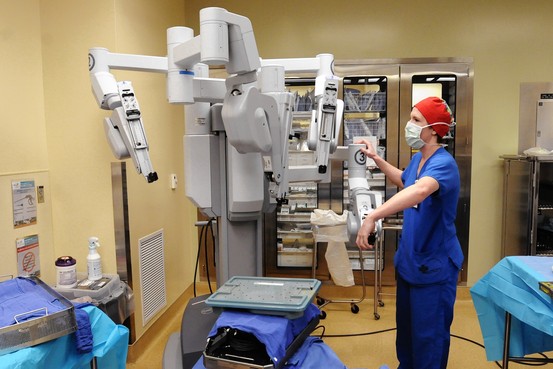 Robots like the da Vinci, pictured, are intended to make it easier to perform minimally invasive procedures. The Star-News/Associated Press

Robots like the da Vinci, pictured, are intended to make it easier to perform minimally invasive procedures. The Star-News/Associated Press

A new study finds treating bladder cancer with a surgical robot made by Intuitive SurgicalInc. ISRG +2.53% is no better at reducing procedural complications than performing the procedure with traditional surgery, a result that surprised researchers, who had expected the robotic technology to be superior to human hands alone.

The small study may cast further doubt on the benefits of Intuitive Surgical’s da Vinci robot, which allows surgeons to perform minimally invasive procedures from computer consoles that control the robot’s arms and surgical tools. A study last year questioned the cost benefit of the da Vinci for hysterectomies, or uterus removal, compared with minimally invasive laparoscopic procedures done by hand.

Many doctors say the robots make it easier for them to perform minimally invasive procedures, and that the procedures are less painful and have shorter recovery times for patients than traditional surgery. But the robot systems are costly, selling for as much as $2 million each, and Intuitive Surgical’s sales have declined recently as hospitals struggle with budget constraints.

In the new study, summarized in a letter to the editor published in the New England Journal of Medicine on Wednesday, surgeons at Memorial Sloan Kettering Cancer Center in New York randomly assigned 118 patients with invasive bladder cancer to have their bladders removed with the da Vinci or with open surgery, which requires a large incision in the abdomen. In both study arms, the second portion of the procedure, in which patients’ bladders are reconstructed, was done with the open surgical technique, which doctors said is common practice.

Prior studies analyzing insurance claims data showed robotic surgery to result in lower rates of surgical complications and death compared with open surgery, and the Sloan Kettering physicians expected to see similar results in their study, said Bernard H. Bochner, a urologic surgeon at the hospital and co-author of the study.

But patients undergoing robotic surgery had similar procedure complication rates to patients in the open surgery group and similar lengths of stay at the hospital following the procedures, the researchers said.

Intuitive Surgical said in a statement that it was “grossly misleading” for the researchers to make a comparison between robotic and open surgery in bladder cancer because the surgeons used the open technique to perform bladder reconstruction in both arms of the study. The company said complications typically occur during the bladder reconstruction phase of the procedure.