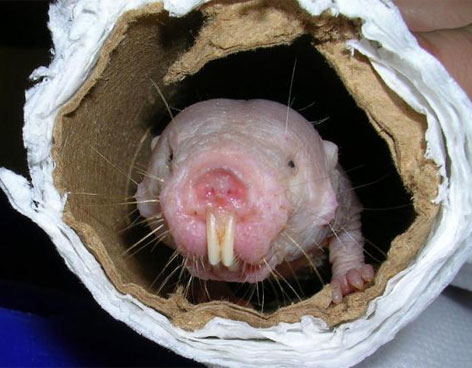 The hairless mole or heterocéfalo (Heterocephalus glaber), which is actually a rat, is being studied by scientists in the United States because his body could hold the key to preventing cancer.

The researchers found that this mammal about the size of a mouse who lives beneath the surface of the earth in a tunnel system, has an extraordinary longevity to be a rodent.

Mice live on average two years but the hairless rat can reach 28 years. It is believed that this is because it carries a life protected from predators, which are difficult to penetrate their tunnels.

But he has also discovered that these animals are immune to cancer, one of the most prevalent diseases in mice.

“Although it has been maintained and studied many of these animals in laboratories and zoos, were never detected a cancerous tumor,” says Vera Gorbunova, a biologist at the University of Rochester in upstate New York, USA . UU.

“Obviously this is something we can not 100% sure, but if we compare the results with the frequency of tumors in mice see a difference from day to night.”

Indeed, it is known that mice have a high incidence of cancer and at the end of his life up to 90% of the animals developed a tumor.

Human beings, and all animals with long life expectancy, have stronger defenses against disease. Cancer causes 23% of human mortality.

“What we’ve discovered so far is that these animals use an additional mechanism, which do not have mice or human-beings have to protect against cancer.”

It says the scientist, a dual system to inhibit cell proliferation irregular. (In humans this is a single system).

“If we put a dish in normal human cells they form a single row of cells, but not be placed on one another and thus prevent cell division.

“Cancer cells, however, they are placed one above the other to continue to proliferate, and that’s how they form tumors.”

The scientists noted, however, that hairless mole cells are very sensitive to “overpopulation”.

“We put the plate in the laboratory the same number of cells than human cells and found that hairless mole not proliferated at all.”

The researchers found that both mole cells as human have a similar cellular system, known as contact inhibition, in both species is organized by a gene called P27.

But hairless moles, also have a version of “primitive” in this system, and scientists believe that use the P27 system as a “booster”.

This is the primitive system that prevents cells from growing and dividing moles when they make contact with each other and when they reach certain levels of overcrowding. And it’s run by another gene called P16-INK4a.

Scientists believe that this dual system is the hairless moles produced extraordinary immunity to cancer.

“We believe this breakthrough could open a new chapter in cancer research,” he says.

“Because so far we have focused on finding treatments for cancer, but the hairless mole potentially offers an excellent model to study how to prevent the disease.”

Researchers believe that the hairless mole evolved with this double system of protection precisely because of his long life.

“For the mice is not really important to have cancer or not because of any form are eaten by predators within two or three years,” she says.

“But it hairless moles, how they live in a very protected and away from predators, had to evolve and acquire mechanisms that enable them to live free of cancer during his long life.”