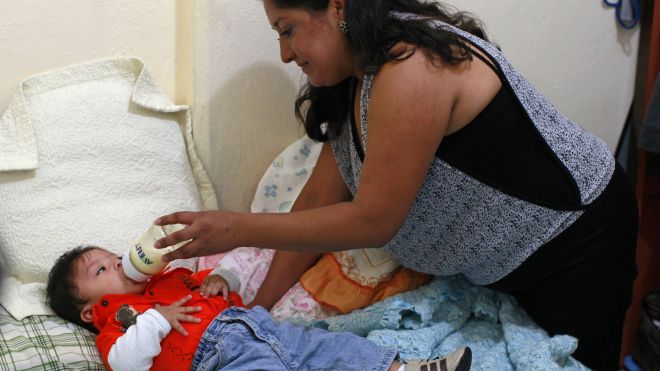 Despite the well-known advantages to breast milk and vigorous campaigns around the world championing breast as best, Mexican mothers say the bottle is better.

In a dramatic decline over the past six years, today only one in seven mothers in Mexico breast-feeds exclusively in the first six months, the standard recommended by the World Health Organization. That leaves Mexico with nearly the lowest level of breast-feeding in Latin America.

Experts call it a public health crisis for a country where millions still live in extreme poverty, dirty water threatens the health of many families and education is poor. Mother's milk is richer in nutrients and antibodies that protect newborns from infections.

Mexico has the highest infant mortality rate among the world's 40 largest economies. Between 2005 and 2010, breast cancer deaths increased twice as fast as Mexico's female population, with some experts blaming declining rates of breast-feeding; studies show it cuts a woman's risk of cancer by 50 percent or more.

Officials blame an invasion of baby food ads, little regulation of formula companies and the failure of doctors to promote breast-feeding for an overreliance on formula.

“Mexico has become the example of what not to do. It's the strongest case of a setback in breast-feeding,” said Marcos Arana Cedeno, a child nutrition expert and health adviser for the state of Chiapas.

Feeding newborns with breast milk can save lives in developing nations, where children have higher chances of dying from diarrhea and pneumonia. The WHO has recommended for the past decade that infants be given only breast milk for the first six months.

The percentage of Mexican moms who nurse their babies that long fell from 22 percent in 2006 to 14 percent last year, according to a Health Department survey.

Only the Dominican Republic has a lower rate of breast-feeding in the region, at 8 percent. Other nations have improved their numbers, led by Brazil and Colombia, which in the past two decades more than tripled the percentage of mothers breast-feeding - to 47 percent in Colombia and 39 percent in Brazil.

For many mothers drawn into the urban workforce, nursing a baby while juggling a job is too difficult.

“I had to go back to work and I wasn't going to be able to breast-feed him for long. That's why I chose formula,” said Ruth Gonzalez, a clothing company manager.

Gonzalez nursed her baby boy, Luis, only at night, after work. He drank formula during the day, and went off breast milk completely after a month. “Formula was just easier,” she said.

Yet, even in traditional rural areas, the trend is downward. Breast-feeding fell by half in poor, rural areas, where babies are exposed to more sanitation problems, according to the Health Department survey.

Nutritionists complain that Mexico has not adopted laws to meet guidelines adopted by WHO in 1981, which asked countries to restrict companies from providing free samples of formula or approaching new mothers to push their product.

“It really is a tragedy,” said Teresa Gonzalez de Cossio, a nutritionist who researches breast-feeding at the National Institute of Public Health. “There is no one making sure we are following international codes. The country is not setting any goals regarding breast-feeding.”

Countries such as Brazil and the United States have long stressed the importance of breast-feeding. The U.S. has improved its rate of mothers who exclusively breast-feed for the first six months to 16 percent in 2012 from 11 percent in 2007, according to the U.S. Centers for Disease Control and Prevention.

Most New York City hospitals no longer hand out promotional samples of formula and ask new mothers to participate in talks on why human milk is better. Portland, Maine, started a campaign asking businesses to make mothers feel welcome to breast-feed wherever they want.

Brazil reversed a decline in breast-feeding in the 1980s by strictly limiting advertising by baby food companies and airing prime-time informational spots with national celebrities to dispel myths, such as that women with small breasts were incapable of nursing.

Mexico lets companies self-regulate on following the WHO guidelines. It has rules that say hospitals and doctors should guide new mothers through breast-feeding, but it doesn't enforce them.

Dr. Rufino Luna Gordillo, the Health Department's deputy director of maternal and newborn care, said Mexico is renewing periodic checks of breast-feeding practices at public and private hospitals, a policy born in the early 1990s that had fallen by the wayside.

“It's clear that these efforts have not been enough to get to the ideal breast-feeding levels,” Luna said in a written statement. “We need to debunk many myths about breast-feeding, limit the abuse of infant formula makers ... and award companies that offer nursing rooms.”

Some new mothers say they didn't receive any help on breast-feeding after giving birth and say nurses, without seeking permission, offered formula to newborns at the nursery. In addition, with half of the babies born in Mexico via cesarean-section, many mothers struggle to nurse in the first hours and days after surgery.

With little government promotion of breast-feeding, myths proliferate: sagging breasts do not provide healthy milk, or that nursing babies will spoil them. Pediatricians also hear women say that they want to stop breast-feeding so they won't lose their perky breasts.

“In Mexico, breast-feeding is not a normative behavior,” said Chessa Lutter, the Pan American Health Organization's regional adviser for food and nutrition. “You are going to see probably walking down the street in Mexico City a lot more bottle-feeding than you are breast-feeding.”

Advocates for breast-feeding say big business is to blame. They claim doctors are plied with gifts by formula makers to get them to help introduce infant formula to newborns.

Elia Rangel, mother of a 9-month-old girl, Samantha, said a family physician told her not to breast-feed after six months.

“We don't have information that is up to date,” she complained. “I came across a doctor at a public hospital who asked me how old Samantha was. She was 7 months. He told me, `Breast milk is no good; it can even harm her.' I was like, `Wow, where did you get this information?'”

The government says it discourages the unnecessary use of formula, but Mexico's own Social Security Institute, whose logo shows a mother breast-feeding, provides formula to women even without a medical need if they present a doctor's note. As long ago as 1993, a study warned that Mexico needed to review that policy because of the high cost in both financial and health terms. The government still pays about &#36;35 million a year on cans of infant formula from the Swiss-based food company Nestle, which receives more than 96 percent of the public money spent on formula.

Nestle and the U.S.-based Mead Johnson, the two main baby food companies in Mexico, responded in statements that they support the WHO's code for breast-milk substitutes and comply with the law. They say they don't advertise food for babies less than 1 year of age or discourage mothers from breast-feeding.

Nestle said it “does not give free supplies of infant formula to hospitals” and cited a 1992 “self-regulatory agreement” that the industry signed with Health Department to end the provisions of formula samples to Mexico's hospitals and doctors.

Chris Perille, spokesman for Mead Johnson, said the company tells health professionals about the benefits of their products but doesn't break the rules.

“Our work with these experts is conducted in accordance with the highest standards of ethics and integrity, and in compliance with all applicable laws, professional requirements and industry guidelines,” Perille said in a statement.