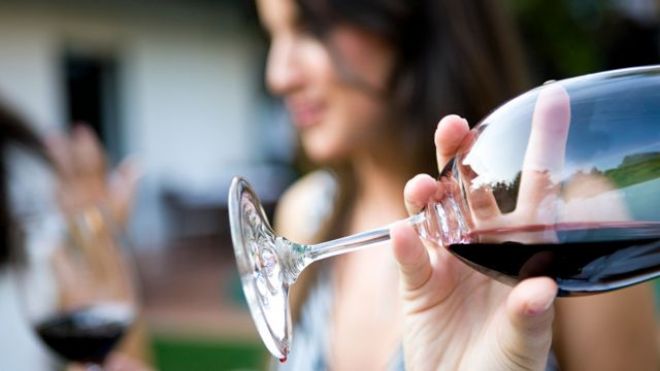 Alcohol and your weight have a tricky relationship. So tricky, in fact, that experts have had a tough time nailing down exactly why some women wind up with a beer gut (or butt) while others drink daily and never seem to gain a pound.

Here's what we know: Your average drink—beer, wine, martini, pick your poison—is usually a combination of carbs, sugar and ethanol (pure alcohol). When it goes down the hatch, it makes a pit stop at your stomach, where some of the alcohol is absorbed through the lining and into your bloodstream, giving you that initial buzz. The carbs and sugar go the traditional digestive route, while ethanol, a toxin, is diverted to the liver.

This is when that innocent little drink starts messing with your internal fat incinerator. Ethanol has no nutritional value, so your body burns it off first. That means any remaining calories in your stomach—whether they're from the margarita or the chips and guacamole you had with it—will likely be stored as fat.&&#35;160;

And the more fattening the foods you eat, the easier the calories are to store. (Bear in mind that research published in Physiology &&#35;38; Behavior found that alcohol makes us focus on immediate pleasure and ignore the consequences, which often results in eating junk food.) Unlike protein and carbs, which require some energy for the body to break down and store, fat can directly deposit itself, so those chips are first in line to be plastered to your thighs.

Still, the situation might not be as bleak as it appears, because the real problem may not be drinking itself, but how often and how hard we hit the bottle.

Drink and Shrink?
A 2010 study published in the Archives of Internal Medicine may be the best news for booze since the 21st Amendment. Researchers found that women who had one or two alcoholic drinks a day were actually less likely to gain weight than those who shunned the sauce. And they did it while consuming more calories overall (from food and drink) than both heavy drinkers and teetotalers.

Short of striking a deal with the devil, how did they manage to pull that off? Researchers believe that the bodies of long-term moderate drinkers somehow adapt to metabolize alcohol differently than heavy or occasional drinkers. They use more energy, burning the calories in the drink—or even more than that—while digesting it, Dr. Lu Wang, the lead researcher of the study and an instructor in medicine at Brigham and Women's Hospital in Boston, said.&&#35;160;

Researchers are still working out the specifics of how and why this happens, but they've figured out that for women who drink up to eight ounces of an alcoholic beverage a day, those calories simply don't end up as extra fat.

MORE: 15 Ways to Boost Your Metabolism

Of course, there's a catch. Women who bank their daily drinks for weekends or girls' nights out don't qualify for the free-calorie plan (and among the 18-to-25 crowd, this “binge” behavior is on the rise, according to a 2009 Addiction study).&&#35;160;

“Your body adjusts metabolically to the amount you drink, and when you don't drink regularly, your body can't adjust,” Wang said.&&#35;160;

Instead of learning to disregard those nutritionally empty calories, your body automatically stores them—as fat. It's akin to tossing old clothes you don't wear into the back of your closet, only your body doesn't have the good sense to hide the junk. It tends to store the fat front and center, in your belly.

Booze Clues
Evidence suggests that moderate drinkers also tend to practice healthier habits than teetotalers. If you're used to having three or four drinks every week as part of your diet, you're probably compensating for them with fewer calories elsewhere.&&#35;160;

“These women know how to moderate how much they drink, so it makes sense that they'd moderate what they eat as well,” Robert Klesges, a professor of preventive medicine at the University of Tennessee Health Science Center in Memphis, said. The Archives study found that these women also exercise more, which knocks off additional calories.

Another thing that helped: The women in the Archives study were served no more than two four-ounce glasses of wine or two 1.5-ounce shots of liquor a day. In real life, you're likely to be handed far more than that by a bartender or waitress—20 to 45 percent more, according to a 2009 study in the journal Alcohol. And we're not much better when left to our own devices.&&#35;160;

“Eyeballing the right amount is very difficult,” William C. Kerr, a senior scientist at the Alcohol Research Group in Emeryville, Calif., said. “Most of us don't even know how much we should be shooting for, so overpouring is typical.”

MORE: 20 Habits That Make You Fat

It's especially easy to overdo it with vino, given that the average wineglass these days looks big enough to hold a school of fish. So a bottle of light beer may be your best bet.&&#35;160;

“Unlike wine and mixed drinks, it's portion controlled—the bottle is right there with the calories printed on it,” says Lisa Young, R.D., author of “The Portion Teller Plan.” “It eliminates the guesswork.”