32-year-old Julia, has been working in a foreign company for eight years, the body has been good, but in a few months before the headache symptoms started. At first she did not care, because not every time is long, headache symptoms go away. Later, she discovered a law, that headache is almost all the time before and after the onset of menstruation. She was extremely frightened, hurried to see a doctor. Doctors about the symptoms and told her: This is the female menstrual migraine.

Migraine is not a female disease, but it’s close. According to research results, attacks of headache are three times more common in women. In other words, every seventh woman has at least one migraine attack per year.

Why women have more migraines than men do, the researchers are still not certain. However, a plausible explanation is for the sex hormones that the woman swings in volume through the monthly cycle. A woman of fertile age is forming two hormones: estrogen and progesterone. It is likely shifts in the balance between estrogen and progesterone, which trigger and/or worsen migraines in many women. 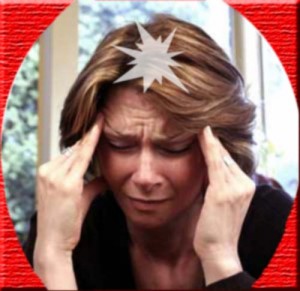 Menstrual migraine, as the name sounds, migraine attacks, which take place around the time the menstrual period begins. The attack can be particularly difficult and take several days and is characterized by pronounced nausea and vomiting. This form affects 10 percent of all women with migraine. Menstrual migraines may be prevented. In addition to the methods used by other types of migraine, one can try to prevent menstrual migraine with magnesium tablets taken in the last half of the cycle.

Another possibility is treatment with estrogen hormone patch or gel applied from three days before to three days after the first day of bleeding. There are also other possible treatments are used either one period in each cycle or continuously. All medical treatment should be done in consultation with the doctor. This applies even if the medicines are available over the counter. Another migraine-like shape is the menstrual-related migraines. Here a framework attacks mostly in the menstrual period but can also attack occur at other times of the cycle. Attacks of this nature can be tried the same treatment as menstrual migraine.

Most women have fewer seizures during pregnancy, which is also in this way is a “good period”. This is especially true if the woman suffers from menstrual migraines. The improvement occurs mainly in the second and third Trimester (4th-9th month). Generally, the use of medications has to be a minimum during gestation. Therefore, if the pain is bearable, it is clearly an advantage.

Often it can help to exercise, avoid stress and hassles, not to eat certain foods (like strong cheeses, spicy and fried foods, citrus fruits, chocolate or red wine). It also helps to avoid tobacco smoke and indoor. Physical therapy, relaxation training, known as biofeedback or acupuncture may also be helpful. Some medicines for migraine can be used by pregnant women, but in any case best to tell your doctor about your pregnancy before medical treatment of migraine.

Women with menstrual migraine are at risk of getting a migraine 3-6 days after birth. Many women also feel that they get more attacks after birth. Breastfeeding women should be cautious about taking medications, because most drugs to a greater or lesser extent excreted in breast milk and therefore transferred to the child. However, the seizures are so severe that medication is necessary. In that case, we recommend certain drugs that quickly break down and remove from the body. Again, you should take your doctor for advice.

Most women experience no change in their migraines after they start taking the pill . In some worse headaches, however, others feel better. If the headache worse, we can together with the doctor try another type of pill, that is, with a different hormone composition. Otherwise, it may be necessary to use another form of contraception. Evidence suggests that a woman with migraines is at increased risk of cerebral thrombosis if she uses birth control pills. Especially if she is suffering from a form which is called migraine with aura. In this situation, one should prefer to use the pill-type mini-pills or maybe a completely different form of contraception.

Symptoms of migraine are like milder with age. Around menopause, many women, however, that migraine attacks only exacerbated in a period, to subsequently improve in the longer term. If you choose to take hormones and / or after menopause, it is not possible in advance to predict how it will go with just your migraines. Some get better, others get worse, and in others, again there is no change. If migraine worsens during hormone treatment, the physician may choose to switch to another drug or change the dose in hopes of lessening the seizures.

How to overcome menstrual migraine?

Why migraine likely to occur in women after puberty to menopause, this period of time, and that women place migraine as likely as men more than 3 times, however, women during pregnancy will suddenly disappear, because the body estrogen level changes due. Estrogen in women during pregnancy is just the influence of progesterone are replaced. Overcome the main method of menstrual migraine are the following:

Calcium and vitamin D: Studies have shown that calcium and vitamin D have a role in the prevention of migraine headaches, every day you can take 500 ~ 600 mg elemental calcium. However, the best source of calcium or green leafy vegetables and legumes class. If you take vitamin D, the appropriate dose of 5 micrograms per day. It is noteworthy that, in order to prevent calcium loss, should avoid animal protein, coffee, tobacco, and excess sodium and sugar.

Magnesium: Magnesium women’s menstrual migraine prevention is very effective. Studies have shown that if the body’s magnesium deficiencies or consume too much can cause migraine headaches. Therefore, the diet contains the right amount of magnesium, the occurrence of migraine will likely be lower. The researchers found that people daily intake of magnesium from food, rich in magnesium foods include: whole grains (including a complete natural fiber cereals), rice; non-citrus fruits such as figs; green vegetables , especially broccoli, spinach, etc., if coupled with 200 mg of magnesium supplement to prevent menstrual migraine would be better.

Progesterone: Menstrual migraine treatment; use a topical progesterone-type emulsion, such as Pro-Gest, in about 10 days before the onset of menstruation, day cast in a thin layer of the skin, it helps the body inhibit the hormone occurs dramatic changes, it can help women eliminate menstrual migraine headaches. Menstrual cramps before and after at least for those women with migraine often quite effective.

Gluconic acid: gluconic acid can improve the role of the brain of oxygen and its use is twice a day, every one, including allowed to slowly dissolve in the mouth.


Exercise can help people resolve the tension and pressure, the prevention of menstrual migraine mild and effective methods. If severe menstrual migraine headaches, you should not exercise, otherwise it will aggravate the pain. In addition to sports, the sun to prevent or eliminate menstrual migraine has a good effect. That is because the body’s ability to absorb dietary calcium and vitamin D, whereas vitamin D is sunlight absorbed by the skin naturally formed. As long as 10 minutes of sun exposure every day, and the resulting body needs vitamin D is enough. Although this is a related factor, but it overcomes menstrual migraine.