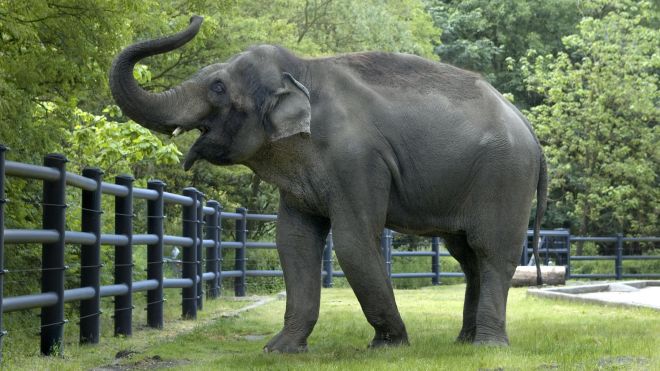 The Oregon Zoo has quarantined an elephant that tested positive for tuberculosis.

“Rama,” an Asian elephant that was born at the Portland-based zoo in 1983, tested positive on Friday. He shows no symptoms of the disease, poses no threat to visitors and is expected to make a complete recovery, zoo staff said.

“We're confident Rama is going to be fine,” zoo director Kim Smith told The Oregonian newspaper. “It's a very treatable disease. We've caught it early with Rama. We feel very good about this.”

Treatment with drugs, however, is expensive, costing more than &#36;50,000, the newspaper reported.

None of the other elephants in the zoo's heard of eight Asian elephants are showing signs of tuberculosis, but they will be retested. The zoo tested some staff members Friday and will continue this week.

It's unknown how Rama contracted the disease.

Tuberculosis spreads among people and between people and animals through airborne bacteria carried in droplets. To become infected, you must be directly exposed to the bacteria while it's airborne.

“In order to contact TB, you have to be in really close contact for hours at a stretch,” Smith said.

The zoo has tested the herd annually for TB since 1999, based on guidelines developed by the U.S. Department of Agriculture. Those guidelines stemmed from the 1996 deaths of two circus elephants touring in California.

An estimated 3 percent of the elephants in the United States have the disease, according to a 2000 study published in the journal Zoo Biology.

The zoo gets 1.6 million visitors a year and the elephant herd is a popular attraction. Rama is the smallest of its adult bull elephants, weighing 9,000 pounds.