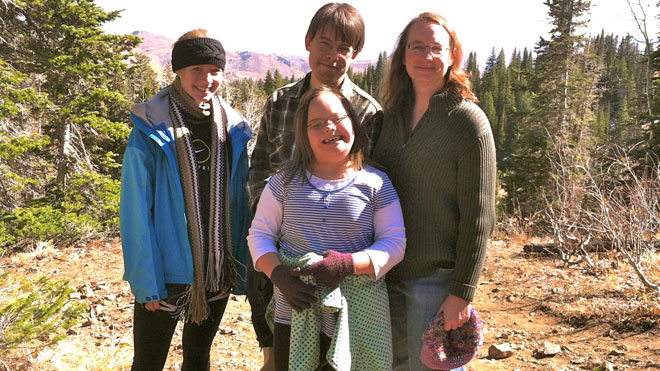 For George Estreich, the decision to write a book about his daughter, Laura, and her diagnosis of Down syndrome came naturally.

A college writing professor and former poet, Estreich started documenting his life with Laura in 2001, when she was 3 Â½ months old, shortly after she had undergone heart surgery.&&#35;160;

This month, he released his book “The Shape of the Eye,” in which he aims to change the negative connotations associated with Down syndrome. When Estreich looks at Laura’s face, he doesn’t see her disability, he sees his lovely daughter – and wants others to see the same thing.

Laura wasn’t diagnosed with Down syndrome until she was 2-weeks-old. At the time of her birth, doctors noticed that she had almond-shaped eyes, which are often a characteristic of Down syndrome. But Estreich brushed off their concerns, attributing the feature to his &&#35;160;Japanese ancestry. Still, doctors wanted “peace of mind.”

“For those first two weeks, we just didn’t know,” Estreich, 48, told FoxNews.com. “We were just waiting for the results.”

Estreich, and his wife Theresa, had an older daughter, Ellie, who is now 17 – and at the time, life seemed pretty good. Estreich had stopped teaching to focus on raising Ellie, while Theresa worked full-time as a scientist.

But upon Laura’s diagnosis, their lives changed.

Laura had a congenital heart defect, which was ultimately fixed during surgery, and a feeding disorder that required her to be fed through a tube in her nose about six months, which was difficult for Theresa, who had wanted to continue breastfeeding.

Estreich set out to research and learn everything he could about Down syndrome, which was named after Dr. John Langdon Down, who first recognized the genetic condition in the 19th century. Individuals with Down syndrome develop a full or partial extra copy of chromosome 21 at conception, which causes subtle changes in development, according to Estreich.

Physical traits of Down syndrome may include low muscle tone, small stature, a slant to the eyes and a single deep crease across the center of the palm; however, each individual is different and may have varying degrees of these characteristics, according to the National Down Syndrome Society.

The Society estimates one in every 691 babies born in the U.S. have Down syndrome, or approximately 400,000 Americans.

Though the risk of giving birth to a baby with Down syndrome increases with a mother’s age, doctors don’t know exactly what causes Down syndrome. With recent advancements in medical technology, the lifespan of individuals with Down syndrome has gone up tremendously: As many as 80 percent of adults with the condition reach the age of 60 or older, according to the National Down Syndrome Society. This is largely due to corrective heart surgeries, like the one Laura had in her first year of life.

The Estreichs, who now live in Corvallis, Ore., opted not to do any prenatal screening during Theresa’s pregnancy; they figured it was pointless since false-positive rates are so high, and they didn’t want to have an amniocentesis, which can increase the chance of a miscarriage. Theresa insisted no matter what a test discovered, she wouldn’t have terminated the pregnancy anyway.

Still, the diagnosis was a shock to the couple.

By 21 months old, Laura was able to walk, crawl and eat. As she grew older, she continued to thrive, even if it was at a slower pace.

Now, at the age of 12, Estreich said she’s pretty much like any other girl on the verge of being a teenager. She enjoys playing video games, especially Minecraft, Halo and Just Dance. She loves going out to eat – especially if it involves pizza, and she participates in a national program called Girls on the Run. Laura has completed three 5K runs in the past few years, improving her time with each race.

And, much to Estreich’s delight, she enjoys assisting him in house renovations, something he talks about throughout the book.

“I don’t know what it is for boys; it’s therapeutic to break things,” Estreich said of his obsession with home-renovations.

'There are no special needs'

At school, Laura is included in mainstream classes about 60 percent of the time, Estreich said, adding that she has a wide variety of friends – including those with disabilities and those without.

Asked whether Laura knows she has Down syndrome, Estreich said he isn’t sure. “As far as she’s concerned, it’s Tuesday, she’s going to school, and she’s putting on a tutu and a tiara. I’m not even sure how she gets away with that.”

“The term special needs – well, someone made a point – there are no special needs,” Estreich said. “For my older and younger daughter, the needs are the same: to thrive and belong, and the way they go about that will be different. We’re trying to help her the best we can, (to) be what she can be. If we have to address Down syndrome to do that, we do. Otherwise, it’s ‘do your homework.’”

As for the future, Estreich hopes Laura can hold down a job, have friends and live with as much independence as possible. Estreich said he believes that Laura will even be able to live on her own someday.

And when people read his book, Estreich wants them to take away this message: They should see a person first - as opposed to the disability. Laura isn’t defined by the shape of her eyes, but rather her cheerful personality.

“I’d like people to think about who belongs in our society, and the obstacles to belonging,” Estreich said. &&#35;160;“And (the book is) not just about (Laura) developing and getting through her medical troubles – but about my development as a parent.”