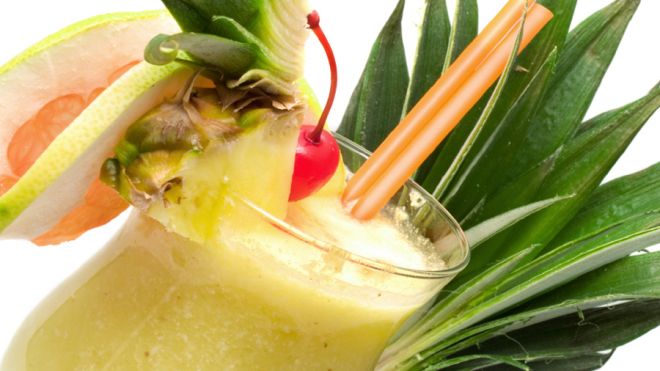 It's officially the season of flip flops, swimsuits, and lots of summer traditions that revolve aroundâ€¦food&&#35;33; From going out for ice cream to munching on popcorn while taking in a blockbuster film, the weeks between now and Labor Day can present some major nutritional hurdles. Here's how to sidestep seven classic calorie bombs, and seriously upgrade your health.

Many of my clients crack open a pint of ice cream, with every intention of stopping at one serving, only to wind up polishing off the whole thing. Switching to frozen yogurt shaves off some calories, but a pint can still cost you 800, twice as much as a slice of cheesecake.

The swap: Nix store bought pints, and make your own novelty treats. Whip up a smoothie in the blender, pour it into popsicle molds and freeze. One cup of unsweetened almond milk, combined with one cup of frozen pitted cherries and one tablespoon each almond butter and dark chocolate chips will make four to six pops for just 280 total calories. Or whip up a batch of frozen bananas—dip mini naners into organic nonfat Greek yogurt seasoned with cinnamon or vanilla (or a plant-based alternative like coconut milk yogurt), sprinkle with oats and nuts, wrap in wax paper, and freeze.

Lighten up your umbrella drinks

A piÃ±a colada is the quintessential summer cocktail, but a 12-ounce portion packs 600 calories, the amount in an entire six pack of light beer.

The swap: Rather than giving up those fun frou frou drinks, whip up your own tropical concoction. Combine a shot of rum with 4 ounces of 100 percent pineapple juice, a quarter cup of frozen banana slices, a quarter cup of unsweetened coconut milk, and a handful of ice. A refreshing, and much slimmer substitute, at just 175 calories.

Old school sushi rolls, made with steamed rice, lean seafood, and veggies provide about 200 calories each, but many “new wave” sushis are loaded with creamy sauces, fatty meats, fried ingredients, and cream cheese, which can tack on at least a few hundred more. A dragon roll, for example, can pack 500 calories, more than a quarter pound burger.

The swap: Ditch the white rice, which is soaked in water with sugar to make it sticky, and order appetizers and side dishes. All together, seared tuna, edamame and seaweed salad add up to less than 350 calories.

There's nothing like a tall glass of ice cold lemonade on a hot summer day, but most are made from water, sweetener, and lemon flavoring (not fresh fruit), and a lot more sugar than you might think. Sixteen ounces of standard lemonade contains the equivalent of fourteen cubes of sugar, about same amount as soda, with absolutely zero vitamin C.

The swap: Make your own. Just a quarter cup of fresh squeezed lemon juice provides over 50 percent of your daily vitamin C needs, a nutrient linked in research to less body fat and smaller waist measurements. For extra flavor, aroma, color, and an antioxidant boost, add sprigs of fresh mint. And if you need a little sweetener, add a splash of a pure fruit juice, rather than sugar. At just 40 calories per quarter cup, 100 percent white grape juice is a good option, but mashing a little fresh fruit in the bottom of the pitcher, like juicy strawberries (6 calories each), will also do the trick.

I absolutely cannot go to the movies and not get popcorn; it's one of my totally worth it splurges. Fortunately popcorn itself is actually a member of the whole grain family, an important food group most Americans fall short on, that's linked to a lower risk of heart disease, type 2 diabetes, cancer, and obesity. And because “popped corn” is fluffy, it's far lower in carbs than dense pretzels, chips, nachos, or candy. The secret to keeping it light is passing on the buttery topping.

The swap: In this case, it's more of a strategy than a swap. A small order can contain 225-400 calories, but going bare (sans butter), saves 130 calories per tablespoon (about the size of your thumb, from where it bends to the tip).

Chips and dip are staples at summer get-togethers, but they're a real recipe for waistline disaster. A handful of potato chips and a golf ball sized portion of French onion dip add up to 375 calories, about as much as a medium order of fast food fries.

The swap: Upgrade to hummus and veggies, and instead of pre-packaged, blend your own batch. A serving made from a half cup chickpeas, a half teaspoon of minced garlic, and tablespoon each of water, fresh squeezed lemon and extra virgin olive oil, provides less than 250 calories, but is packed with 6 grams of satisfying protein, 7 grams of filling fiber, good-for-you fat, and a spectrum of antioxidants. Scoop it up with low cal, nutrient-rich veggies, like fresh broccoli florets, grape tomatoes, and sliced cucumber.

Whether you grill up turkey, salmon, or black bean burgers, one of the savviest ways to slash excess calories is to get rid of the bun, especially if you'll be indulging in any other starchy sides, like potato salad. You probably won't miss it (I've never had a client who included hamburger buns on his or her can't-live-without food list), and replacing it can instantly save you 150-300 calories.

The swap: Seventy five percent of Americans fail to fit in the recommended minimum three daily veggie servings, and one of the best ways to fill the gap is to wrap your protein of choice in either crisp lettuce leaves, or two grilled Portobello mushroom caps. The latter provide just 30 calories each, along with fiber, plenty of antioxidants, vitamin D, and a little bonus protein. Outer leaves of romaine, or bibb lettuce are virtually calorie free, and great sources of immune-supporting vitamin A. And while veggies may be a little messier than a bun, the nutritional trade offs are well worth the extra effort&&#35;33;

This article originally appeared on Health.com.