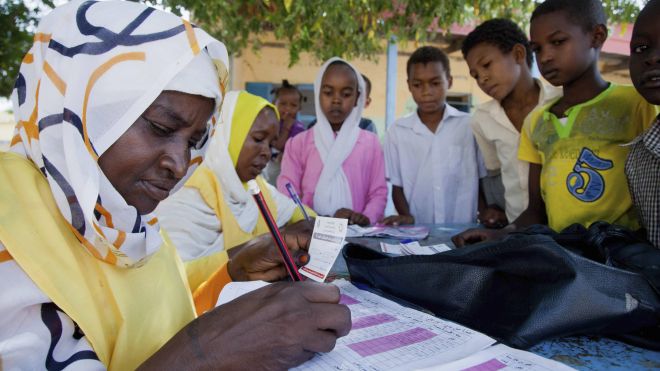 Case numbers in Africa's meningitis season this year were the lowest in 10 years thanks to a cheap new vaccine designed to treat a type of the disease common in the so-called meningitis belt, the World Health Organization said on Thursday.

The vaccine, called MenAfriVac, was developed with funding from the Bill &&#35;38; Melinda Gates Foundation specifically for use against meningitis A, a type which causes regular epidemics in Africa.

Detailing data for January 1 to May 12, the United Nations health agency said that just under 9,250 meningitis cases, including 857 deaths, were reported in 18 of the 19 African countries under enhanced surveillance for meningitis.

Epidemics of meningitis A occur regularly in Africa's “meningitis belt”, a band of 26 countries stretching from Senegal to Ethiopia, and are particularly devastating to children and young adults.

Bacterial meningitis, known as meningococcal meningitis, is a serious infection of the thin lining surrounding the brain and spinal cord. It can cause severe brain damage and is fatal in 50 percent of cases if untreated.

According to the non-profit Meningitis Vaccine Project (MVP), which helped develop the MenAfriVac vaccine, the seasonal outbreak of meningitis across sub-Saharan Africa in 2009 infected at least 88,000 people and killed more than 5,000.

The WHO said the falling numbers this year were due to the introduction of the newly developed vaccine. MenAfriVac costs just 50 U.S. cents a dose and has been progressively introduced in Africa since 2010, starting in Burkina Faso, Mali and Niger.

“The introduction of this first meningococcal vaccine available for preventive purposes in Africa has enabled the immunization of over 100 million people from 10 countries in the meningitis belt in the past three years,” the WHO said.

“The reduced case load and epidemic activity observed this year adds to the evidence on the impact...of this vaccine.”