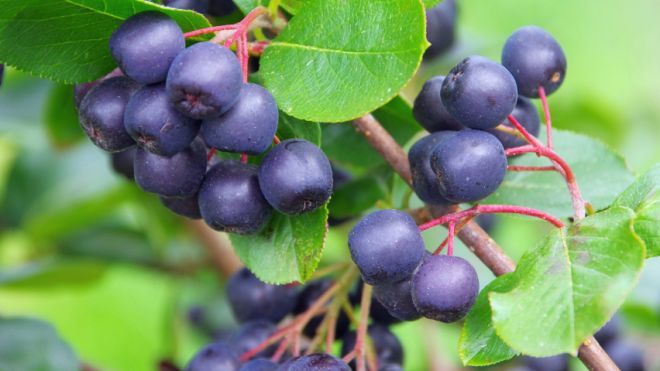 While elderberry from Austria, acai from the Amazon, maqui from Patagonia and sea-buckthorn berry from Northern Asia have all made headlines as super berries packed with nutrition, a lesser known North American berry is gaining ground, poised to hit the nutritional spotlight as a world class super berry: Aronia.

Commonly found wild in woodlands and swamps, aronia is also known as chokeberry, due to its astringent flavor. The berries come naturally in three colors – red, purple and black-purple. Aronia melanocarpa, the black-purple species, has a much deeper purple color than blueberries, which are also North American natives. The berry is now cultivated, and that cultivation is expanding in anticipation of the berry’s impending popularity.

The deep purple color of Aronia melanocarpa has attracted a lot of scientific attention. Purple fruits by virtue of their color are rich in the category of antioxidants known as anthocyanins. These pigments demonstrate potent cell-protective properties, and are also anti-inflammatory, helping to reduce systemic inflammation – a key factor in the development of chronic diseases.

But this is just the start of the benefits offered by aronia. Digging more into the compounds found in this native berry, scientists have found a number of more specific agents, including caffeic acid, cyanidin-3-galactoside, delphinidin, epicatechin, malvidin, and many more. You’ll likely never have to remember these names, but to health researchers, the presence of these compounds in aronia is big news.

Combined, these specific agents in aronia are anti-bacterial, anti-viral, and anti-diabetic. They fight the formation of arterial plaque and lower serum cholesterol, and they protect the liver against a host of insults and toxins. &&#35;160;In our ever-increasingly diabetic society, aronia’s compounds help to lower blood sugar and improve the body’s own natural production of insulin.

Several of the compounds in aronia are natural cancer fighters, and protect against the development of tumors of the bladder, breasts, colon, lungs, ovaries and skin. In addition, these compounds fight Crohn’s disease, inhibit HIV, reduce uncomfortable symptoms of PMS and fight herpes. Preliminary studies have also shown that aronia may prove helpful in slowing the growth of glioblastoma – a form of fatal brain cancer.

Since the 1940s, aronia has been commercially cultivated in Russia, and since the 1950s, it has been a commercial crop in Europe. In 2009 the Midwest Aronia Association formed in Iowa to provide information and resources to farmers who wanted to get involved with commercial farming of this super berry. According to the association, members are now found in California, Illinois, Iowa, Michigan, Minnesota, Mississippi, Missouri, Nebraska, New York, North Dakota, South Dakota, Wisconsin and Ontario, Canada.

In the world of berries, antioxidant activity is a major factor in the endless jockeying for position as top berry. Aronia has greater antioxidant activity than cranberry, blueberry, strawberry, cherry, pomegranate, goji and mangosteen. You can think of aronia as the King Kong of antioxidant berries. This awesome antioxidant power gives growers of the berry confidence that super-stardom for aronia is close at hand.

Aronia berry products are already in the market, and some have received coveted USDA Organic certification – the highest standard of agriculture purity in effect today. Unlike strawberries and many other fruits, aronia is naturally pest-resistant and does not require the use of agricultural toxins. This spells good news for those who do not want unhealthy chemicals in their fruits.

In the contest for ever healthier foods, aronia is surely a winner in the making. With science demonstrating significant benefits to health, farmers planting large acreage and the media increasingly boosting its fortunes, it’s only a short matter of time before aronia, the North American super berry, leaps to prominence in juices, jams, jellies and many other products.

Chris Kilham is a medicine hunter who researches natural remedies all over the world, from the Amazon to Siberia. He teaches ethnobotany at the University of Massachusetts Amherst, where he is Explorer In Residence. Chris advises herbal, cosmetic and pharmaceutical companies and is a regular guest on radio and TV programs worldwide. His field research is largely sponsored by Naturex of Avignon, France. Read more at& MedicineHunter.com.